Oh my stars it’s been so long since I’ve blogged about fitness. I barely know where to begin.

Let’s start here. I’ve broken up with the scale. Part of this is because I have a new scale, and my old one is the one I used for my entire journey up till it broke shortly after D was born, and was therefore a consistent measure for what it was worth, which was not as much as other measures. But then it broke and we didn’t replace it till last May. So we have problems-one, there is a huge gap in time, so it’s not like I stepped on one scale and it gave me data and then the other and it gave me data to compare and account for a discrepancy. So the second problem is from that-how do I know how much weight I lost in the year between weighing myself? According to the new scale- NOTHING-in a a year. Seriously, I weighed in at 181 a few weeks postpartum and when we got the new scale it said I weighed 181. So. I do know I had lost about a pant size (which was very unsatisfactory but it was what it was.) now, as of the last time I weighed, (a week or so ago-just to see) I had lost TEN lbs-in Ten months. Aaaaaaargh! But here’s the thing: I’ve gone down from a 10 to almost a 4 in jeans in that time. And again, I don’t know the discrepancy between scales. Maybe when the old scale said I weighed 161 this one would have said 171- the scale at my Dr always read 10lbs different, so it’s possible. The last time I was wearing these jeans (3 years ago) I weighed about 156. Super close to my lowest ever. So, yeah, I got nothing.
I’m definitely gaining muscle definition and strength which is awesome. My belly still drives me bananas but that’s possibly not ever going to change. Haha! My mental health stuff (another post I’m to exhausted to even contemplate but need to) is wearing me out but I’m fighting for consistency-first in sleep and fitness at the same time, then working getting up early and adding daily house work back in. Fitness and sleep are The essential building blocks.
This month I’m doing the same thing I did in March 2014, alternating a heavy strength day with a yoga day, and getting on my bike (using the Peloton app) T/Th/Sa. In April I’ll probably keep the same formula but change the workouts. More on that when I decide.
Here’s some pics of where I’m at now. 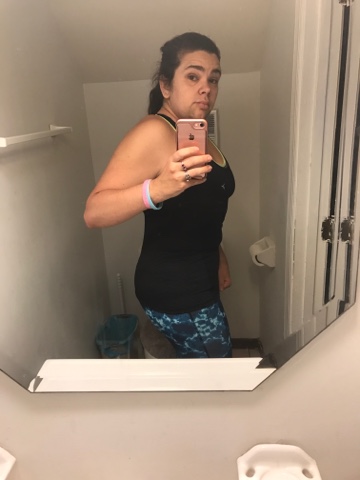 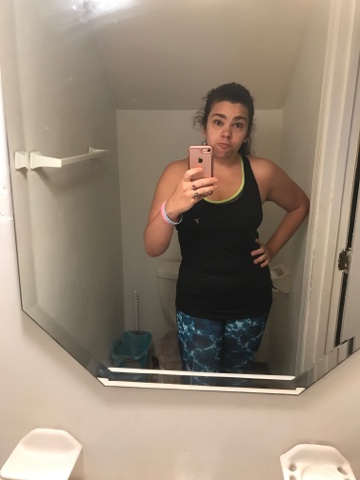 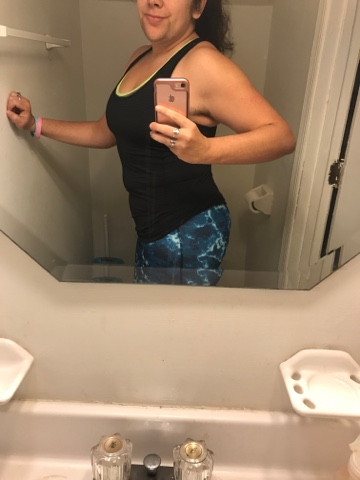 As you can see, I’m further towards #ropesngunsnabs than I’m giving myself credit for.  Side by side progress pics coming early April!