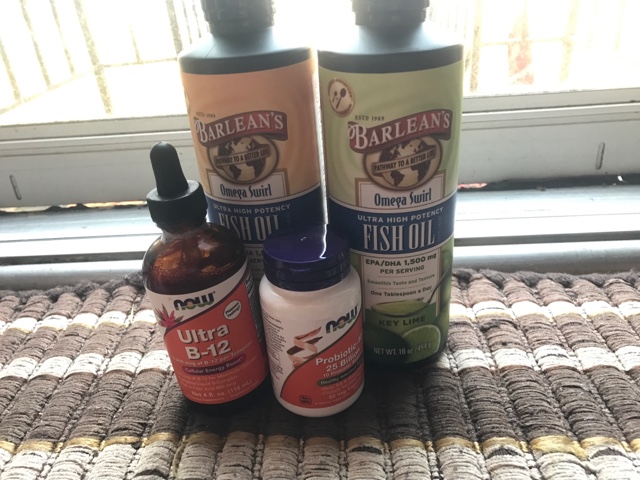 These products are the newest step and effort in my treatment of and recovery from PPDA. I’ve done lots of reading, and found that deficiencies in B12 and general inflammation (helped to heal by high potency EPA and the right probiotics) can cause or exacerbate mental health issues.

So here’s the plan:
Morning/breakfast: 1 tsp B12/1 Tbsp Omega Swirl (plus other supplements I normally take)
Between Breakfast and lunch: probiotic
Lunch: (after week 1) Omega Swirl (plus normal supplements)
Dinner (normal supplements)
Bedtime: magnesium drink
I’m also transitioning my fitness regimen to be more yoga focused even as I pursue building strength and endurance with Jillian and cycle- I need the mind/body connection and all the mental health balancing effects of my favorite workout.
I’m really hoping to see some improvements in the next 2-6 weeks, and eventually, when I’m better, I can reduce the omegas to a maintenance dose.
I’ve realized recently that my body has been through a LOT hormonally in the last almost six years. Just to start, I have PCOS, which, even though I have learned to manage it well, keeps my hormones all kinds of whacked out, as evidenced by the fact that I ALWAYS have more facial hair than most teenage boys, I’ve never had a menstrual cycle less than 36 days, and anxiety and depression have been my companions to some degree as long as I can remember.
Then, this has been the past 6 years:
January-august 2011— charting and TTC naturally
Sept 2011: progesterone and month one Clomid
October 2011: progesterone and double the dose clomid- Lexi conceived! YAY
Oct 2011-July 2012: pregnant with Lexi
July 2012-November 2013-Nursing Lexi
December 2013-January 2014 nursing lexi AND Pregnant with September Baby
January 2014: lost September Baby, kept nursing lexi till late February
February 2014: weaned lexi
April 2014: month 1 clomid
May/ June 2014: month 2 clomid- Declan Concieved YAY
June 2014-Feb 2015- pregnant with Declan
March 2015-December 2016-nursing Declan and PPDA
December 2016: weaned Declan Still have PCOS
Now, obviously that’s not the biggest hormonal roller coaster anyone has ever ridden, but it’s really taken a lot out of me, and seeing all that mapped out has given me some perspective on what it might take to heal.
*BTW: I chose the Barleans Omega Swirl for two reasons: the taste (like a smoothie!) and the 910mg EPA per serving.

2 thoughts on “A New Treatment Plan”