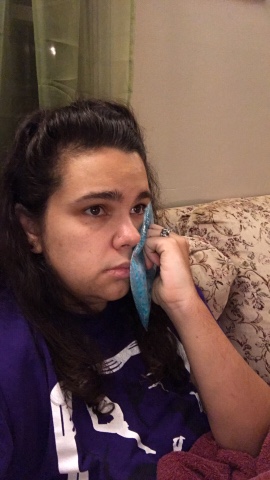 I  haven’t worked out since November 22. Its December 2. I’m so unhappy about that, but it’s not been for lack of drive or desire. It’s been entirely not my choice.
See, on the evening of 11/21, the first day of my holiday fitness plan, I was eating chili, and I guess there was a bone fragment in the meat, because I broke a huge chunk of my tooth off. I barely slept that night due to anxiety over whether it would turn painful, whether I’d lose the tooth… it was rough. To ease my mind, Scott took me to the dentist Tuesday morning. She looked at it and said I’d need a root canal and crown, unless we discovered a deeper crack, in which case she’d pull the tooth. I came home and tried to rest, but I was too anxious. I did crank out that day’s strength workout and an interval ride on my bike.
Then Wednesday morning I woke up with my anxiety manifesting physically in aches, a sore throat, and feeling feverish. I had no fever, and no real symptoms-this just happens once in awhile when I’m really depleted and anxious. It lasted through Thanksgiving, the whole weekend, and Monday, though it was milder.
Tuesday morning I went in to have my root canal praying that this was the end of this and that in two weeks when my permanent crown came, it’d all be over and I’d keep my tooth and be back to working out on Thursday. But, the worst case scenario played out, as the root canal showed a crack in my tooth down to the root. The tooth had to come out. But it didn’t want to. It took the dentist 30 minutes to get it out, and by the time she was stitching me up, the numbing was wearing off. By the time I got my meds in hand I was hurting pretty badly. I continued to hurt some of the worst I ever have in my life until 10 pm when suddenly the painkiller cocktail started going it’s job and I was able to sleep. Wednesday morning I took my painkillers and immediately felt sick, and lost my breakfast around noon. I spent the rest of the day trying to refuel and sleep that off while managing the pain without that medication. Thursday was better pain wise with only ibuprofen but I had a terrible headache and felt very weak even when the mouth pain was managed.
Today Scott has gone to work, at least for the morning, and I’m trying my best to not call him to come home. I’m much the same as yesterday with the headache and weakness and dizzy. I’m frustrated because I want to feel good and start back to working out, but it’s not gonna be today. I drank a few sips of coffee and set it aside.
As tough and discouraging as this has been, I am thankful for many things. I’m thankful that it wasn’t such an emergency that I had to have the tooth out immediately and lose my last week of nursing Declan. I’m thankful that Scott was home last week while my anxiety was making me feel sick. I’m thankful that he’s been able to be home and care for me and the kids as I’ve recovered. I’m the that I don’t even have to think about the implant process until at least February and I can focus on healing and Bodyshred in the meantime and use my post implant time as post Bodyshred recovery in February/March.
I’m hoping for at least a walk or easy bike ride and/or the Amazon Echo 7 min workout today, and maybe some strength and a walk tomorrow, to get me back on track to be working out again for real on Monday. I’ll start my supplements then, and restart the MommyTrainer challenge. Then I’ll to two weeks of the Model body Challenge before our trip, during which I’ll do a simple body weight circuit and walk as able.
I’ve been sidelined, but I won’t let it derail me  or keep me from my goals.