Today was the last day of phase 1 of this round of JMBR. It’s about to get real, y’all.  Workouts 5 & 7 are crazy intense, and it’s gonna be a challenge mentally as well as physically to push through and overcome. This round, though, has already been full of victories, and in stark contrast to previous ones. I remember during my first round, when Lexi was 7 mos old, giving up In tears halfway through workout 3. Yesterday, my last time through that one, I used heavier weights than everyone in the DVDs on every exercise and did more reps than them on almost everything.

I’m not sure what my measurement/size results will be this Monday, but I do know progress is happening, and at some point soon, the results will have to show. I kinda feel like they already are, though. I might be holding some water, but if I can shed that, (and hopefully have a period!) I think I’ll really see changes. I feel like my face is still pudgier than it should be, but we’ll see.
Something I have noticed about the way I’ve written about this journey is that as I go along, I learn more and more about what’s important to include as reference for the future. I’ve never really talked about how I adjust my calorie intake, and that’s gonna change! Because yesterday I spent way too long playing sleuth and figuring it out. So, just like in fall 2013, I’ve started at 1600 net calories. I’ve  bought a new scale, and with every 5 lb decrease, (assuming I started at 180)  I’ll reduce calorie intake by 50 calories, until I get to the last ten lbs, at which point I will incrementally increase calories until I’m at a level that should have me losing 1 lb a week instead of 2. When I hit 150 I’ll slowly start increasing calories until I’m at a maintenance level. I’ve never been there before! Maintenance for 150 is like 2000 calories. That’s bonkers on days I cycle…which brings me to… 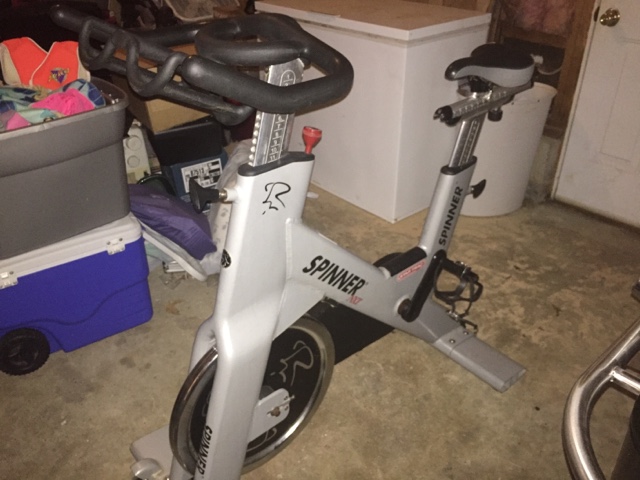 Scott got me a spin bike! With our plans to put a power rack and bench in the garage, as well as the gym being less convenient right now, getting this and cancelling our gym membership seemed like the best choice. We got a great deal in it, and since it’s kinda old, I’ll be doing some research to choose its replacement when it’s time. I’m super excited to be able to get a ride in anytime now, and that a long ride will only take up an hour of my time instead of two, with all the time getting to and from class. I’ll miss my amfam family, but I imagine we will be back, at a different season. My plan is to work up to two hardcore hour long rides per week, and two 30 minute freestyle cardio rides.

I’ve got my workouts planned out through pretty much the next year. I’ve got some long term goals – ABS!- and I’ve put a lot of thought into what it’s gonna take to reach them. So, I’m gonna finish JMBR, then do the Killer Series, then Killer Body, and right at the end of September, start Body Shred again! I’ll follow up with the BS master trainer series, then another round of both those, then killer series, then BS round 3, followed up by master trainers. That will bring me right up to my 35th birthday, at which point I gosh darn better have amazing abs for the first time ever, if not before.
One thing I’m still kinda chewing over is plyo. BR has lots of it, BS has even more. I’m hoping that my foot heals enough that by September when I start bodyshred I’ll be able to not modify. Until I am consistently waking up pain free, though, I have to play it safe, take my supplements, wear my compression, and be patient.
Guess that’s it for now! I’ll be posting a goal check in on Monday with pictures, measurements, and thoughts going forward!