So, Whole30 is done. I’ll probably do another 15 down the road a little, and a whole30 at least once a year, just to keep as healed up as possible. As far as weight loss, I think I’ve lost all I can purely from food. I’ve always known exercise is my best weight loss tool, and since I’ve gotten a great start over the past week and a half, the biggest hump I’ll have to get over is the period of swelling and retaining water that always accompanies at least the first few weeks of hard workouts.
Now, to the point. What changes with Whole30 being finished? Well, we can have an occasional dessert, which will be nice. I plan on 85% of these desserts being Paleo, with a splurge for sweet frog once in awhile if I can tolerate it. I think the “no treats” restriction was really hard on Scott. I’ve missed chocolate a bit, but mostly excited to see if these recipes are as tasty as they look! Otherwise, I don’t plan on changing much here at home, and even eating out really. Easter should be interesting…
What’s my next goal? Well, since Lexi has been born, I’ve been hearing a lot of “it took 9 months to put the weight on, give yourself at least that long to take it off!”
Ok, well, Lexi will be 9 months old on 4/24, so that’s the goal date I’m shooting for to lose this last 11 lbs I’ve gained since getting pregnant. I actually care less about the number on the scale than how my jeans fit, so really, I’m just shooting to be back comfortably into my pre-maternity jeans. Ideally, I’d like to look like the picture in this post, which I’m sure you’ve all seen a million times. At that point I’ll be about halfway through week 7 of this Jillian Michaels program, and halfway through my 4th week back to spinning, so I should be able to lose the 2 inches each I’m shooting for off my waist and hips. 🙂 I’m going to do my official weigh and measure on Monday the 22, because I tend to swell up after a lot of hard work. 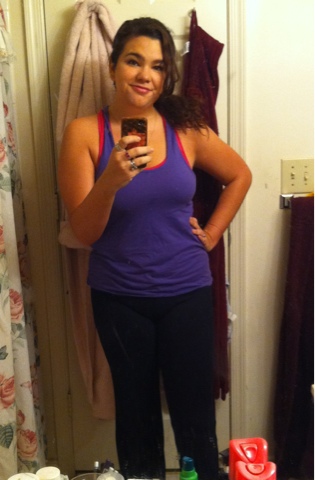