So, I mentioned in my most recent fintess update that there was a piece of the puzzle that I was saving to share later, and here it is:

I’ve been in love with Spinning since my very first class at the gym almost six and a half years ago, and I literally cried when we had to cancel our gym membership (it just was not fitting into our current season) because I had a real community with my instructors ( I MISS YOU SHELLE AND BOB!!!) and the folks I rode with every Tuseday and Thursday. Shelle became my friend during my fertility struggles before Lexi, during my pregnancy with her, postpartum, through the amazing transformational time between kids, through the loss of September Baby, fertility times again, pregnancy with Declan, and my first year postpartum. That’s a LOT of big stuff I shared with her. We are still facebook friends, but I miss her face.(I miss everyone’s face, but that’s a whole other thing. I hate my mental health struggles. ) Cycle classes themselves have been a massive part of my athletic journey too, even more than the camraderie and relationships. If you go back to, I think November or December 2013, there’s a post about a class that was taught to me by me in my own head and it was transformational. Scott knew all this, and so when we decided to leave the gym, he bought me a used gym quality spin bike on craigslist.

I wanted to love it. I wanted it to be everything I needed. But it was old and not a super smooth ride and gave me no data feedback because it had no display. I tried really hard to love it, and tried using my own Spotify playlist to self motivate, and that worked okay for a few months, and I think I rode once or twice a week. Then I lost my drive when I got tired of the same songs-even though they were my favorite songs from Bob and Shelle’s classes. For awhile I used Fitness Marshall videos on YouTube for my playlist. I did that for a couple months and it was okay, but I never hit a real groove with consistency. Then I saw an ad for the Peloton bike. Well we couldn’t afford a 2k bike, but they had an app, and I could take classes on the bike I had for $13.99 a month! This was great! I started using the app in mid February 2017 and I loved it, but man was taking an actual class harder than I remembered, particularly on this bike with no readout of speed, distance, or even resistance. I don’t know how many classes I took in those early days, but it wasn’t many. And then my depression/anxiety crash hit hard. I rode once a month in April- June, and seven times total in July and August, and not again until late October, when I had a little resurgence and did short classes twice a week through mid November, and not again till late January, when I started trying again to build consistency. I did okay, but it was really hard to motivate myself. Somewhere around Valentine’s Day, Scott and I were talking about my frustrations with my fitness and weight loss, and after telling me he’d do anything he could to help, he said something along the lines of “I feel like your bike has always been like the Anchor in your fitness journey, but I don’t see you riding that much. Why is that?” and I reluctantly and in a meandering way shared my frustration with the bike I had and that I really felt I needed the Peloton bike. It was so hard for me to say that, because it was just a huge expense, and seemed equally ridiculous and absolutely necessary.  It was a long talk, with me feeling defensive, Scott overwhelmed, but with us working together to find a solution of a way to fit it in the budget. We did, and Scott said “go for it,” and I cried.

My bike came on February 24, and I fell deeply in love the second I clipped in. It rides like butter, it gives me do many data points of feedback, and SO many classes. I’m not here to do a Peloton ad, but y’all, there’s hundreds of classes available, live and on demand, there’s YOGA, stretching, and even strength training available. The possibilities are literally endless.

Since getting my bike I have been riding live at 7AM four days a week, and doing a scenic ride on Saturdays. I NEVER rode more than 2-3 times a week at the gym, even though I was there 5 days a week for awhile. I love the live rides, both for the accountability of having to show up on time and for the sense of “We are all in this together!” I’m also kinda hoping to end up in the same class as fellow Peloton rider Hugh Jackman one of these days. He posts about his rides on SM, and recently set a new PB (personal best on output in kJ) in a class led by one of my favs, Alex Toussaint.

Speaking of PB’s, I am definitely benefiting from finally getting some data feedback. I t’s obviously much easier to follow along in a class when you can actually try to match the numbers being called out, and it also lets me see how I’m improving, as far as how often I can actually do what’s asked of me. There’s also a leaderboard onscreen, which lets you see your effort/output up against the other (usually 400+) people riding in the class. Right now I’m sorta back of the middle of the pack, and that’s okay with me- for now.  Right with your name on that leaderboard though, is the most motivating piece of data for me right now-my pace toward my PB. As soon as the ride begins it matches where you are right now with where you need to be to be on pace to beat your best. That number gives me a boost to push as hard as I can in every moment. That allowed me to set a new PB each time I rode last week during the week, and then a new one yesterday.

Today, for example, I got on the bike for my last hard class of the week, feeling tired and sore, and toward the beginning I was trending below pace for the PB I set yesterday, and I told myself “I just don’t have it today, and that’s ok. I don’t have to set a new PB two days in a row.” But I didn’t let that stop me trying, and at about the three-quarters mark, I was trending 21 kJ-close to 10% above my PB. I lost a few points during the arms segment (y’all! Most Peloton rides have ARMS in them. Game changer.), but finished the ride 17 kJ above yesterday’s PB! That’s a 7% improvement! I cannot imagine what it’s gonna take to beat that, but I can’t wait to try. Also, for perspective, Hugh Jackman’s new PB he posted Sunday was just under triple my current one. So, plenty of room to improve, haha! He was also 13 out of 1349 riders in that class. Holy wow.

I’m definitely seeing improvements in my leg strength and endurance- today was proof of that, so much climbing… and I am really excited to see more and more. Now that I have data points to watch, I can see where I have most room to improve (speed during standing songs and with greater resisitance) and see improvement when it comes. It was a lot harder to feel like I was getting anywhere with nothing to reference.

As far as impact on my weight loss, I don’t have anything super exciting to report-yet. I’m hovering around the same weight the past couple weeks- essentially the same weight I’ve hovered within 10 lbs of for the past three years. I have not tried on my jeans recently, mostly because I know I have majorly increased my activity demand and like I’ve shared over and over, my body blows up whenever I do that. BUT! I am not planning on increasing intensity or frequency in any major way anytime soon, so I am actually expecting some impact either on the scale or in my pants (haha!) pretty soon. And I have not gone back up to that highest weight of 2018, even after eating an embarassing amount of birthday cake last weekend (YOLO).

I mean, look at that Birthday Boy and his cake!

I’ve been really prioritizing naps the past couple weeks, hoping to mitigate the effect of this increased effort on my anxiety, and it’s helped. though this week was the hardest anxiety week I’ve had recently. I’ll probably continue to nap most days for the forseeable future. It takes away from the time I’d like to be spending reading or writing or doing other self/soul care, but I clearly need it.

Other than the birthday cake last weekend, food has been going great. I am in love with my giant salads at lunch, and Scott is loving all the new meals I am trying, so YAY!

6AM: Matcha latte with Coconut oil and butter (recipe below)

3:30PM: Superfood Protein shake (if i am awake)

-goals/plans for the future

Current weight:180 (I don’t know how that’s possible but whatever.) 40 Lbs below my starting weight, 30 above lowest weight from june 2014. 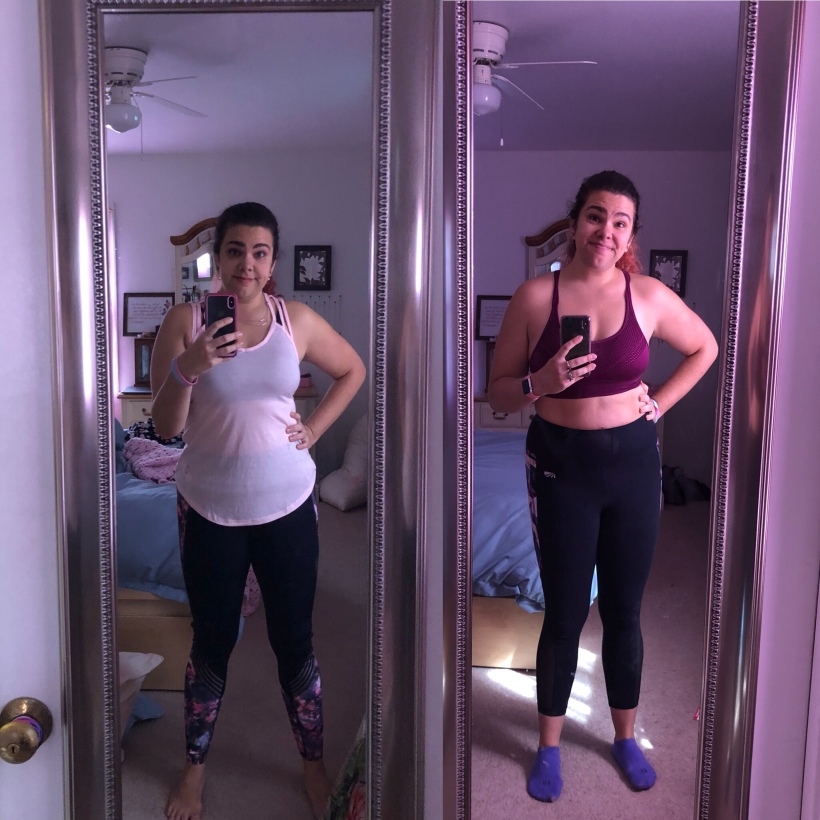 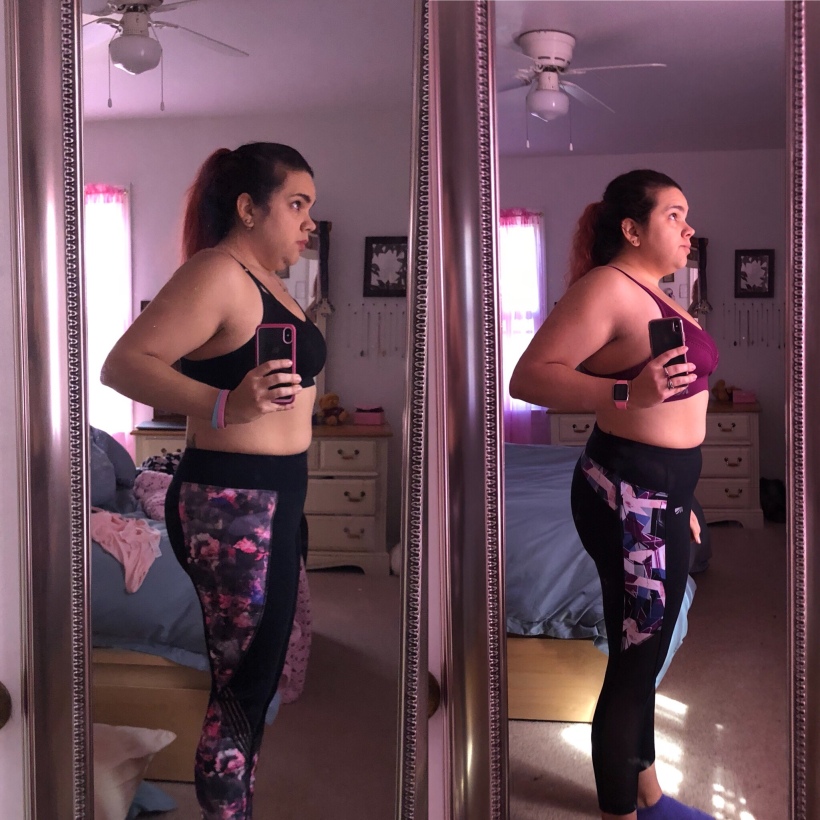 Current fit of goal jeans: nope. I gotta find a good time to take these pictures, maybe Sunday Morning? I can’t do it first thing Monday-which would be ideal, because Scott is still asleep. The problem with doing it Friday after my ride is everything is so swollen. No part of me looks improved.

Now it’s time to crank out this last JM workout of the week! only three weeks left of this 90 day program!