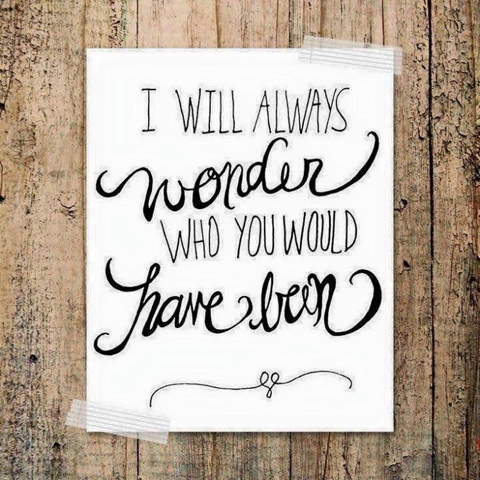 Note: I was told about 7 years ago to stop marking this anniversary and “move on” by a couple people I consider close friends, and I was told the same only a couple months after our second loss by a family member. I realize that not everyone sees pregnancy loss as a big deal, or understands deep mourning for a child one has never met.  If you are one of those folks, this post isn’t for you. I don’t say that with hostility, I just don’t want to waste your time.

To my first baby:
It was ten years ago this Sunday (October 9) that I said goodbye to you. Not just to you, but to the dreams I had of who you could be.  That was the day you were born, impossibly early, after a short labor that wrenched my heart as much as my body. I held you in my hand, knowing I’d never hold you in my arms.   I never got to know you, even whether you’re a boy or girl, but despite the shortness of our time together-
Sweet Little Baby, you changed me forever. Until your sister came along, nothing in my life had such an impact. Everything that followed your birth,  (because it was a birth-I labored 97 hours with your sister and brother, and your birth counts too.) whether it seemed good or bad at the time, happened because, for a brief time, you lived in me and I will never be the same.
Without your birth I would never have instant messaged the author I discovered when I was pregnant with you and recovering from your loss, we never would have become friends, leading me to all sorts of new online pursuits to escape from the pain I couldn’t handle. Without you, the friendship wouldn’t have led to a job, to many new friendships-many of the people reading this wouldn’t be, because podcasting wouldn’t have become what it was to me.
I wouldn’t have almost lost your daddy to the mistakes that stemmed from unresolved grief-but you know what? Even that was a gift, because losing you, and all the ways it tore us apart was the catalyst for the ground up rebuilding of our marriage and I wouldn’t trade that for anything. Little Baby, it hurt so bad, but it’s created a new marriage- and better, more mature and united, understanding, forgiving, and spiritually united parents for your brother and sister.
Losing you, and the way it broke us apart for awhile ended up preparing your daddy for when we lost September baby too. He knew what to do, and how to love me better, because he learned from you.
Because of you, my first baby, I had hope. I knew my body could conceive, and so had something to give me courage while we waited.
Because of you, I am more thankful. For your sister, from the moment I knew she was growing, for your daddy, who is servant leadership personified, for your brother, whose unpredictability is his charm. I don’t take a single moment for granted, because I know the sadness of dreams dashed.
Because of you, I am more patient. I waited a long time for your sister, but more than that, I have a greater capacity for patience *with* her and Declan. I never got to love you like I wanted, and knowing that loss and all the years I waited after, keeps in perspective the gift of motherhood.
Because of you I celebrate every moment of magic in motherhood, because it feels like such a gift, I can’t take it for granted the way I may have if it had come easily. I let Lexi climb in bed and hold her a little while in the night when she wakes, partly because I’ll never have that with you. I fought with all I had for a nursing relationship with Declan, and I’m letting him keep nursing even now, because it’s a powerful and tender thing, and I’ll only get to experience that intimacy for a short time, and I never did with you.
The past ten years have been long and short and up and down, but I wouldn’t trade them, or the short time I had with you. Lexi and Declan are my rainbow babies, and there can be no rainbow without the rain. I celebrate you, and the gift that you were, and are, and will always be.
I miss you, though I never met you, but I know someday I will.