Ok, it’s been far too long since I’ve updated. Let’s just say it was an eventful month. The day after our 12 week appointment, we found out our dear (if not super close in recent years) friend Patrick Holyfield was days away from passing away from a fast moving and agressive cancer. Four days after that, he did. That week (and really, the few following it too) was/were brutal, and kicked up my anxiety, which had been less of a battle this time up to that point. I’m triggered, I’ve discovered by intense negative emotion, even unrelated, to fear for the baby, and this was a big issue. Then, I tried my new pregnancy workout, and had some after effects that weren’t a cause for alarm, but made me feel anxious, so I’ve taken it a bit easier other than walking the past couple weeks. I plan on working the yoga back in and returning to my walks at the gym too.

My doctor had said I *could* expect to feel the baby move as early as 14 weeks, and since then, I’ve been on high alert, and maybe a little bit desperate to start feeling what we in our home call “the bomps” . I think I’ve felt something fairly distinctive at least once or twice, but obviously at 16.5 weeks it’s still early and baby is still pretty tiny (about 5 inches long) so, I’m trying to be patient and exercise my trust muscles.
We had our 16 week appt last Friday (9/12/14) and it went perfectly. Belly is growing, blood pressure is good, and best of all, baby has a big healthy heartbeat! Yaaaaaay! Something else awesome happened that same morning, but it/he deserves his own post.
Here’s a couple pics!
15 weeks: 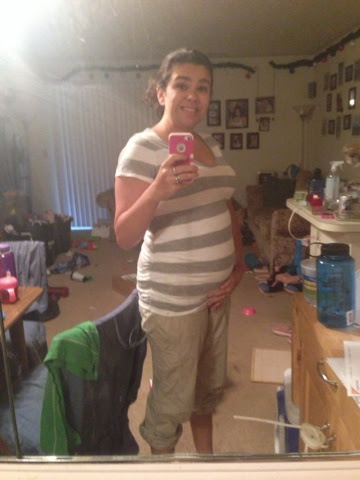 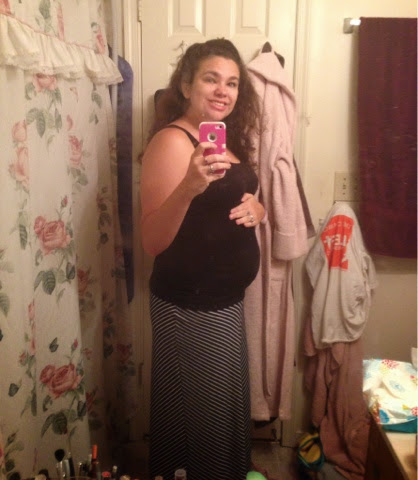