So today I’m almost better! YAAY! I’m not feeling any withdrawal symptoms, and I think that’s a combination of 3 things: I ate pretty clean in the first place (no, really, I have been overall since this time 2012), I started practicing at this paleo thing a few weeks ago, so maybe my body had already started healing(?), and, well, I’m sick, so I haven’t really been asking much of my body this week. That last thing is gonna change, though, starting tomorrow, and ramping up from there! Lexi’s sleep training was short and sweet, (3 nights with a little fussing at bedtime, then smooth sailing since!) so I’ll be sleeping better and have some ME time in the evenings, and hopefully a schedule will begin to form FINALLY!! I’ve been really following Lexi’s lead, and enjoying her baby days, and I have no regrets, but I’m excited for my days to have a bit more to them!
Three things about today:
— Scott wasn’t a huge fan of the flavor combo in the sautéed veggies tonight, and our theory is that it was the zucchini/tomato combo (there were also leeks and mushrooms). So, no tomatoes next time in that mixture.
–I’m in LOVE with my Practical Paleo book and the online resources available at balancedbites.com! I’m so excited to use the recipes and meal plans!
–I have decided this is going to be, at least for me, a Whole45. I found out there’s a little added sugar in my bacon, I had a couple (sugar free) cough drops this week, and I just really want to make sure I give this the best shot at real Healing as I can. Not that I plan on venturing too much off the paleo road in the future, but I want to stay strict a bit longer. I decided, rather than starting over-and asking Scott to- I’d just add time to mine and let him decide when to reintroduce for himself. So, April 3 will be the “official” end date for this experiment, and the next time I’ll weigh and measure myself! 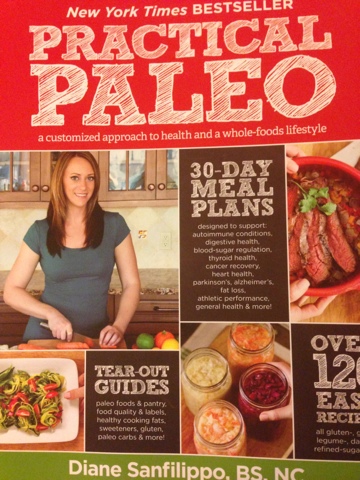